Yesterday we ended up at Rust en Vrede due to another establishment lower down in the valley not being able to accommodate us. I say ‘ended up’ like it’s a bad thing, but I was secretly very, very pleased as I’ve been meaning to visit Rust en Vrede for lunch but as they don’t serve beer it’s been a hard sell! Not having booked, and already unsuccessful at finding a table at our first stop, my heart sank when I saw the amount of cars as we drove up the final stretch of road to Rust en Vrede. I went inside to enquire while Fishop parked the car, and to my relief the snazzily dressed and very friendly young waiter said they had a table for us. He led us outside where we could choose a table under the trees on the upper or lower deck. 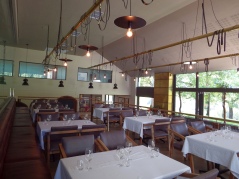 Rust en Vrede – Upper Deck
Of course Rust en Vrede is famous for its fine dining restaurant and was under the Top 10 of the Eat Out Restaurant Awards for 2014, but what many people don’t know is that they serve a Winemakers Lunch from Monday to Saturday at their tasting room. The fact is not really advertised on their website, other than stating that there is a lunch option, and I heard about their ‘steak’ lunch via word of mouth. The Winemakers Lunch keeps things very simple, with only two choices: Steak or Salmon. Steak is served with chips, salad and a glass of Syrah and Salmon is served with new potatoes, asparagus and a glass of Steen. Of course, in the interest of research we had to try both, so I had the salmon and Fishop the steak. As Fishop doesn’t drink wine I got ‘stuck’ with two glasses of wine but I definitely wasn’t complaining! The Steen was a very pleasant surprise and really complimented the Salmon, but I absolutely loved the 2012 Syrah. Full bodied, bold yet smooth, I could go on and on but I’m not a wine writer so I’ll leave it to the experts!

Rust en Vrede – Wine
Service throughout our meal was very attentive and professional, though to be fair, with a menu containing only two options it shouldn’t be too hard to get things right! When our food came it was nicely presented with a large piece of salmon for me and a nice chunk of steak for Fishop. My salmon was very well cooked and the potatoes and asparagus a nice accompaniment. The steak was sirloin and supposed to be around the 200g mark but the portion we got looked larger than that. Of course I tried some and I was briefly sorry that I didn’t get steak as well as it was some of the best steak I’ve had recently. The steak was perfectly cooked, with a nice char and very tasty, with no basting or sauce to obscure the taste of the meat.

Rust en Vrede – Steak
The Winemaker’s Lunch may seem a little bit pricey to some, but Rust en Vrede wine is not cheap, so the inclusion of a glass of wine actually makes this a pretty good deal. I’m also sure some people would prefer much bigger portions of meat and salmon, but we found it perfect for lunch. Despite the relatively low profile of the Winemaker’s lunch it was very busy and I would advise calling ahead to make sure you’re not disappointed. To me, this was a wonderful example of a simple concept and menu executed to perfection. I was very happy to not be disappointed in the Rust en Vrede lunch as so often happens when I really look forward to trying out somewhere new….not naming any names!
After finishing our lunch at a leisurely pace and me finishing my 2 glasses of wine, we walked around the estate and took some more pictures. Rust en Vrede is on the lower slopes of the Helderberg mountain, with some amazing views on the way there and the farm itself is picture postcard pretty, with lush green lawns and vineyards, white buildings and blue mountains. 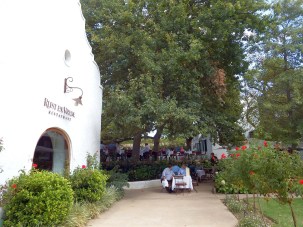 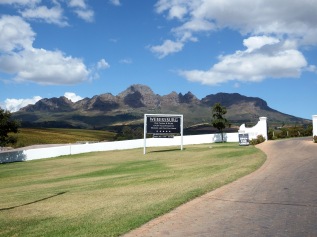 Follow Elsa Reviews Restaurants and Bars – and more on WordPress.com

Adventures in liqueurs, liquor and other potables.

wat brand in my kop

Moonlight glistening on the water shaped how the evening developed...